We welcome European Commission commitment to a roadmap to replace animal testing for chemicals
1.4 million people support record-breaking second ECI for animals in laboratories
Over half a million animal experiments in Italy in 2018 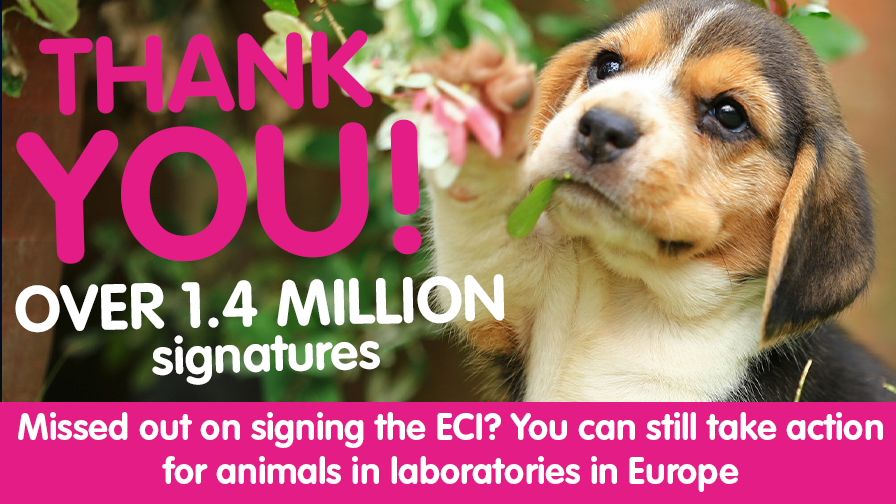 Posted By Beth on 31st August 2022
SHARE THIS ARTICLE:
Over 1.4 million people had signed our Save Cruelty Free Cosmetics / End Animal Testing European Citizens’ Initiative by the time it closed at 23:59 on Wednesday 31 August – but we still need your support to keep the pressure on for change.  Thank you to everyone who signed to end animal testing in the EU and to people not in the EU who couldn’t sign but actively supported the action – we are delighted that 1,413,383 people have demanded an end to the outdated and unreliable use of animals in cosmetics and chemicals tests, as well as an ambitious plan to bring all experiments on animals to an end.  Yet there’s no time to rest.  All signatures must be submitted to each member state within three months of the closing date. Each signature goes through a verification process, and after receiving all verified signatures the European Commission will carefully examine the ECI. Within one month of receiving it, Commission representatives will meet with the organisers, so we can explain the issues behind the ECI.  Within three months of validation, we will have a hearing in the European Parliament, followed by a possible vote, and then within six months, the Commission will give its formal response and explain what action it proposes.  Kerry Postlewhite, our Director of Public Affairs, said: “Huge thanks to each and every one of the 1.4 million people who have signed this ECI and given a voice to the over ten million animals used in laboratories in the EU every year. We are incredibly proud of this collaborative landmark and look forward to successful validation of the signatures.  “Europe’s lawmakers must now surely appreciate the strength of feeling there is on this issue. The people of Europe have made the task for the European Commission clear: it must come forward with substantive legislative proposals to phase out animal experiments and end the suffering. We demand change in testing and research. It is high time for Europe to evolve past cruel and outdated animal testing.”  To date, only six ECIs out of a total of 90 that have been registered have successfully reached one million validated signatures. It is, though, the second ECI on this issue that has surpassed the one million signature mark. The first was Stop Vivisection in 2015.  You can help us build on this successful ECI by emailing the European Commission to make sure that they listen to our call for an end to animal testing. Use our simple tool to email the Commission. Together, we can help achieve a Europe in which no animals suffer in laboratories.
×