Brussels vigil to save Europe’s ban on cosmetics animal testing 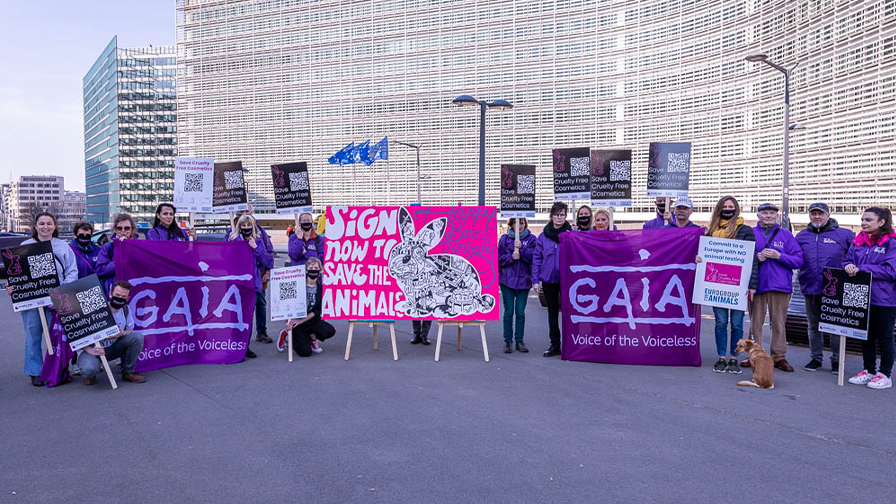 Posted By Beth on 11th March 2022
SHARE THIS ARTICLE:
Today is the 9th anniversary of the European Union’s cosmetics animal testing bans – but this year we won’t be celebrating.    Despite huge public support for the bans – which shows that 74% of adults in EU member states agree that animal testing for cosmetic products and their ingredients is unacceptable in all circumstances – the European Chemicals Agency (ECHA), supported by the European Commission, continues to demand new tests on animals for chemicals used as cosmetics ingredients under chemicals legislation. This means that many thousands of animals will once again be suffering and dying for the sake of beauty, even for ingredients used exclusively in cosmetics.   Together with Eurogroup for Animals and our Belgian associate member, GAIA, we held a vigil for the bans in front of the HQ of the European Commission and Council of Ministers in Brussels. We were joined by French street artist, Ckeja, who painted live throughout the vigil to create a striking visual representation of the threat to the bans.  Our Director of Public Affairs, Kerry Postlewhite, said: “Europe’s leaders often trumpet how brilliant the EU’s cosmetics animal testing bans are – and how they were ground-breaking and a model for the world. However, we know that more and more animal testing is being required by regulators for ingredients in cosmetics, against the wishes of European consumers and cosmetics brands. But we can all stand up and say that we want our bans back and we want them strengthened. We have the power!”    If you are an EU national, you can help us end animal testing for good by signing to save animals at www.savecrueltyfree.eu.   If you live in the UK, you might know that the Government has said that it will allow animal tests for ingredients used solely in cosmetics. Please sign and share our petition which we hope to present to MPs soon.   Residents of the United States can help make a difference for animals by completing our quick form asking your US Representative to support the Humane Cosmetics Act.
×