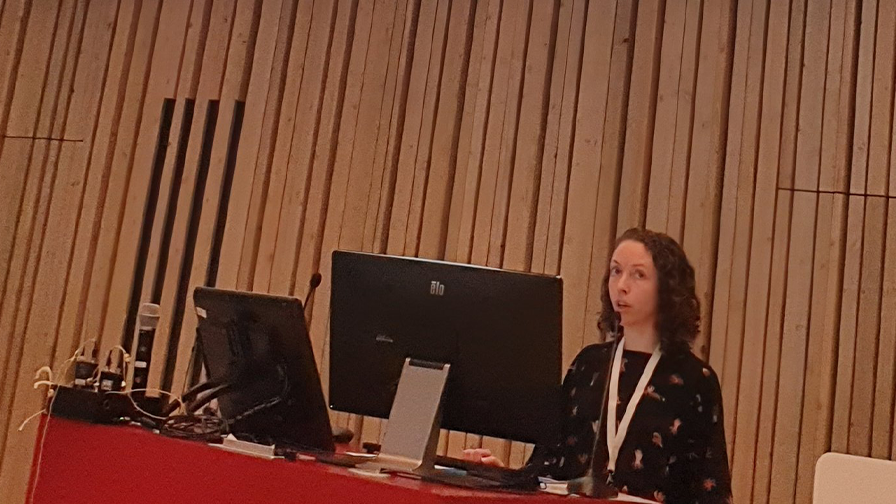 Posted By Beth on 4th October 2022
SHARE THIS ARTICLE:
Last week, Cruelty Free International scientist Sam represented Cruelty Free Europe at the European Society for Alternatives to Animal Testing (EUSAAT) Congress in Linz, Austria. Read on to hear about her experiences of the conference.  An uneventful flight, short train ride and peaceful wander through residential streets brought me to the youth hostel in Linz on Sunday afternoon. After a nap and a shower, I braved the rain, armed with an umbrella kindly lent by the hostel’s reception, in search of dinner. I was very grateful to find some delicious vegan Japanese food and to meet some wild toads on the way home.  Susanna Louhimies of the European Commission did a fantastic job opening the conference on Monday with a keynote lecture on “Development of the 3Rs field in Europe”. A session on COVID-19 followed, where I found out about the role non-animal methods have played, and continue to play, in researching the disease.   The afternoon saw me deliver my talk on the Replace Animal Tests (RAT) list: a list of ten animal tests, mostly conducted in an attempt to assess the safety of products, that still take place despite having widely accepted non-animal replacements. We estimate that 1.5 million animals suffer and die each year in RAT list tests in the EU – something that is completely unjustifiable, both legally and ethically. The presentation was well received and provoked interesting questions and debate.   I was grateful to unwind in the evening with friends from other animal protection organisations over some more excellent vegan food, and I went to bed full and happy.  Tuesday opened with one of my highlights of the conference – an inspiring keynote lecture from Professor Merel Ritskes-Hoitinga of the University of Utrecht on “Evidence-based transition to animal-free innovations: let’s make it happen!”, where she discussed the power of systematic reviews to expose the weaknesses of preclinical animal tests. This was immediately followed by a stimulating session on “3Rs Policy: Accelerating the Transition to Innovation without the Use of Animals”, where I heard about the current situation in the EU and was exposed to fascinating perspectives of social scientists, who recognise the need to address non-scientific barriers to transitioning to animal-free science. At lunchtime, we were treated to the music of a talented three-piece band – one of whom played a barrel organ – which stimulated some impromptu dancing from conference delegates – my other highlight of the conference! More great talks, a poster session and a very emotive session honouring EUSAAT Secretary General Professor Horst Spielmann’s contributions to the society took care of my mind, while the fantastic gala dinner in the evening took care of my belly and gave me the opportunity to deepen connections with friends old and new. On Wednesday I attended fascinating sessions on 3Rs and education and replacement of animal-derived products, followed by a lively panel discussion over lunch on the latter topic. Another poster session and more valuable talks on topics including non-animal methods in Parkinson’s disease research and drug failure rates since the 1960s rounded off the scientific programme, before delegates, tired and happy, said their goodbyes and made their way home.  I had a fantastic experience at EUSAAT Congress and am grateful to the organising committee, led by Dr Winfried Neuhaus, for their hard work, the scientific committee for giving me the opportunity to present the RAT list, and Cruelty Free Europe for funding my attendance.   Attending this conference allowed me to learn about the latest developments in animal-free science, meet others working to end animal testing and get the word out about the RAT list – all of which is crucial to Cruelty Free Europe’s mission of ending animal testing across Europe. Bring on EUSAAT Congress 2024!  You can help to end animal testing in Europe by emailing the European Commission. Use our simple tool to urge them to listen to the 1.4 million people who signed our European Citizens’ Initiative. Together, we can help achieve a Europe in which no animals suffer in laboratories.
×